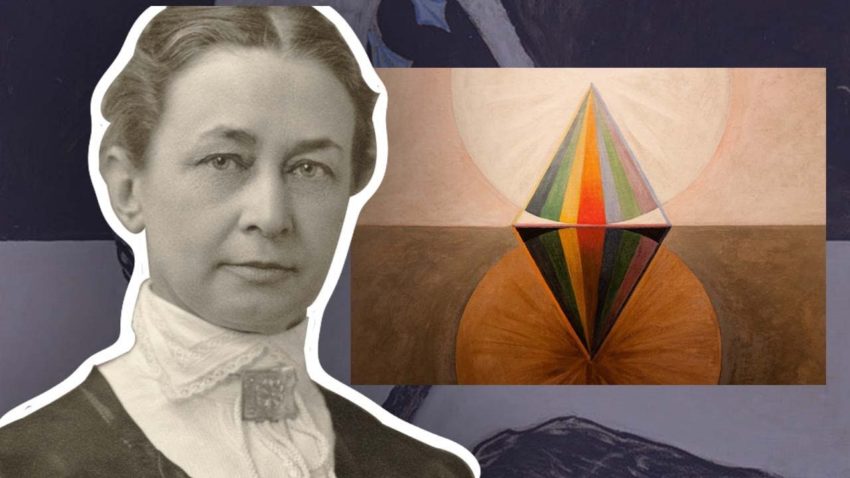 I discovered Hilma af Klint during my final year as an undergraduate (Fine Art) student. At first, I was mildly interested. But as I began reading more about her, my interest peaked. I became awestruck by the grand scale of her compositions, the fact that she predates abstract expressionism by almost two decades, and that her work was kept hidden until seventy years after her death. This artist suddenly became fascinating. It is not often where you can view genius from the past with fresh eyes, untouched by art critics and thinkers who would have created a whole narrative. Now, was a chance to consider af Klint’s pioneering work a hundred years later without having countless historical articles to sieve through – it is, in a weird way, like time travel.

Who was Hilma af Klint?

Hilma af Klint (1862-1944) was the fourth of five children born to a middle-class family from whom she inherited a great love and interest in mathematics and botany. At an early age, af Klint showed a keen ability and fascination with the visual arts. During her teenage years, she moved to Stockholm with her family and enrolled at a college of further education in arts, crafts, and design. In this institution, af Klint learned portraiture and landscape painting. After this education, at the age of twenty, she was accepted into the Royal Academy of Fine Art where she continued her classical studies for a further five years. Af Klint graduated from the academy with honours and received a studio space in Stockholm’s artist quarter. From here, she began to gain recognition and a steady income for her conventional and straightforward paintings. However, af Klint had a secret – a private and separate practice that was kept hidden from the public for over seventy years.

During her studies at the college of further education, af Klint developed a strong interest in the spiritual and the occult. However, these interests grew extensively after her ten-year-old sister’s death (when af Klint was only twenty). During this time, she began attending seances and spiritual gatherings while engaging with mediumistic experiments such as automatic writing and drawing. Alongside this, she developed her interest in esoteric belief systems by reading Helena Blavatsky’s The Secret Doctrine (1885) and the philosophical writings of Christian Rosencreutz. The co-editor of Frieze, Jennifer Higgie, also suggests that one of af Klint’s early influences was the young Norwegian painter Edvard Munch, who had a much talked about exhibition in a gallery space next to af Klint’s studio. Higgie believes it is here that af Klint saw artwork that turned away from external realities towards an internal one (Higgie 2016).

When af Klint died at the age of 81, her will stated that her large volume of paintings, texts and notes should not be viewed until she had been dead for at least 20 years (Higgie 2016). She believed that the world was not ready for her message. However, it was not until forty years after her death that her work was finally shown in the exhibition The Spiritual in Art: Abstract Painting 1890 -1985 in Los Angeles. Then, a further thirty years, in 2013 with the opening of Modern Museet’s major retrospective Hilma af Klint – A Pioneer in Abstraction (Voss 2016). Since this exhibition af Klint has become a widely celebrated abstract artist, known for her pioneering style, which predates the ‘so-called’ forerunners of abstraction – Wassily Kandinsky, Piet Mondrian, and Kazimir Malevich. Af Klint is now considered a pioneer and inventor of abstract art (Lomas, et al. 2013).

Af Klint’s work was inspired by her awareness of the spiritual dimension during an increasingly materialistic time. Her work was an attempt to depict an inner reality and make the unseen visible. The director of Modern Museet, Iris Muller Westermann, described, “her multifaceted oeuvre attempts to provide insight into the various dimensions of human existence in which the microcosm and macrocosm mirror one another.” Her luminous visual works depict markings of symbols, letters, and words developed from an originally organic abstraction to an increasingly geometric one.

The abstraction in af Klint’s work developed from 1896-1906. During this time, the artist joined with four other women to form a group called ‘De Fem.’ Besides af Klint, the group included the artist Anna Cassel – a friend from the Academy of Fine Arts ­– along with Sigrid Hedman, Cornelia Cederberg, and Mathilde H. In this circle, the five women were acting as mediums. Thankfully, minutes were kept during the meetings describing how, in the beginning, Hedman was the medium who received messages in a trance from numerous beings. These entities identified themselves as Gregor, Clemens, Amaliel, and Ananda – they wanted to convey messages to humanity through pictures. This request required the five women to practice automatic drawings, resulting in hundreds of configurations.

It is interesting to note that these early drawings already contained motifs that af Klint later returned to in her extensive cycle of paintings, such as the ‘spiral,’ the ‘snail,’ the ‘rose,’ and the ‘lily.’ Additionally, most of the pencil drawings were signed ‘D.F’ (De Fem). The configurations were only signed by the person wielding the pencil on rare occasions – highlighting the importance of the message over the artist’s authorship.

When af Klint was 43, she accepted a commission by Amaliel to produce The Paintings for the Temple which became her central body of work. She described,

The paintings were painted through me, without any preliminary drawings and with great force. I had no idea what the paintings were supposed to depict; nevertheless, I worked swiftly and surely, without changing a single brushstroke (Lomas et al. 2013).

This commission resulted in the production of 193 images categorised into series, groups and subgroups. The article Painting the Unseen describes the whole sequence as af Klint’s pursuit of understanding the original ‘oneness,’ an essential unity which she believed existed at the beginning of the world’s creation (Birnbaun & Enderby 2016).

How is af Klint a Visionary Artist?

Af Klint has been labelled a visionary artist by various critics, but why has she been described this way? To answer this question, I will refer to Jung, who states that it is essential to distinguish between two entirely different modes of creativity to judge a work effectively. He described, “in one case, it is a conscious product shaped and designed to have the effect intended. But in the other, we are dealing with an event originating in unconscious nature” (Jung, 1966).

Jung describes these two modes as the psychological and visionary mode of creativity; the former is directed by the ego and exists within the limits of comprehension. In contrast, the latter is strange in form with content that can only be understood intuitively (see previous article: ‘The Visionary and Psychological Mode of Creativity’). In Jung’s view, the visionary mode forces itself upon the artist, bringing its own form, reminding us of our night-time fears instead of our everyday life experiences. With this mode, the artist is overwhelmed by a flood of thoughts and images that they never intended to create and which their own will could never have brought into being. Jung explained:

These works positively force themselves upon the author; his hand is seized; his pen writes things that his mind contemplates with amazement. The work brings with it, its own form; anything he wants to add is rejected, and what he himself would like to reject is thrust back at him. While his conscious mind stands amazed and empty before this phenomenon, he is overwhelmed by a flood of thoughts and images which he never intended to create and which his own will could never have brought into being. Yet in spite of himself, he is forced to admit that it is his own self speaking, his own inner nature revealing itself and uttering things which he could never have entrusted his tongue (ibid. 110).

Af Klint’s mediumship experience could be interpreted as an archetypal encounter that resulted in the production of visionary and symbolic imagery. It seems that her conscious mind could not make sense of the interaction, resulting in her announcing the possession of spirits. This proclamation may seem bizarre to the modern mind. However, it is crucial to consider the possibility that during the 19th and 20th century spirituality and mysticism played a key role in humanities attempt to understand the complicated psychological system.

Image 1: http://hilmaafklint.louisiana.dk/ (fair use of copyright material, to foster the creation of culture and exchange of ideas).

2 thoughts on “The Visionary Art of Hilma af Klint”