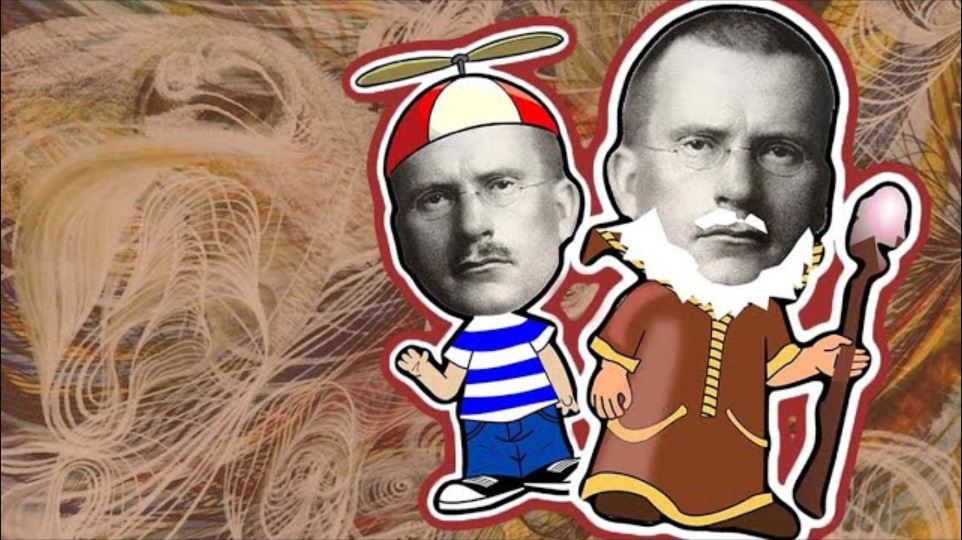 In the essay ‘On the Relation of Analytical Psychology to Poetry’ (1930) Jung describes two modes of creativity. The psychological mode where the artist derives their inspiration from the sphere of conscious experience and the visionary mode which depicts unknown aspects of the unconscious in the form of symbolic and archetypal imagery. This article explores the development of Jung’s understanding of these two modes.

In Memories, Dreams and Reflections Jung wrote about his experience in childhood of having two personalities, the sense of two inner selves which he labelled ‘No.1’ and ‘No. 2’. He describes how “science met the needs of No.1 personality, whereas the human or historical studies provided beneficial instruction for no.2” (Jung 1963, para. 91). No.1 was associated with science and concrete facts whereas the other aligned to religion and spiritual problems.

He further describes his No.1 personality as the little schoolboy and discusses his role comparative to his peers, ‘less intelligent… hardworking… cleaner than many other boys’ (Jung 1963, para. 61). Here, Jung is describing his persona, the rational depiction of himself, that was understandable in the forefront of consciousness. In contrast, Jung describes his personality No.2 as “sheer nonsense” (Jung 1963, para. 51). This side of his personality had no definable character and was instead “a total vision of life” (ibid. 107). He writes:

Grown up – old, in fact – skeptical, mistrustful, remote from the world of men, but close to nature, the earth, the sun, the moon, the weather, all living creatures, and above all close to night, to dreams and to whatever ‘god’ worked directly in him (ibid. 61).

This early idea developed into his differentiation of fantasy and directed thinking, which was introduced in his essay Two Kinds of Thinking (1912). He writes:

We have, therefore two kinds of thinking: directed thinking, and dreaming or fantasy thinking. The former operates with speech elements for the purpose of communication and is difficult and exhausting, the latter is effortless, working as it were spontaneously, with the contents ready at hand and guided by unconscious motives (Jung 1956, para. 20).

For comparative reasons, consider the experience of writing an essay, with this practice we must direct our thoughts in a linear fashion to produce coherency, this is directed thinking and reflects Jung’s No.1 personality. Directing thinking, or logical thinking produces innovations and is adapted to reality. This mental process is a manifested instrument of culture that has been shaped with great force by education for centuries. Educational systems have been largely focused on teaching directed thinking forcing our mental capacity to develop from the subjective individual sphere to the objective social sphere. The use of directed thinking is a new development in the history of the world and was unknown to earlier ages.

Now imagine, sitting at your desk at school, and your thoughts begin to drift, jumping from emotions and images in the form of daydreams. Here, your thoughts are not directed in a linear fashion and instead jump around effortlessly. This is fantasy thinking and is linked to Jung’s No.2 personality. This mode turns away from reality and sets free subjective tendencies. When we are not thinking directly our thoughts lack all dominant ideas and sense of direction. Jung describes how “we no longer compel our thoughts along a definite track, but let them float, sink or rise according to their specific gravity” (Jung 1921, para. 18).

The people of the Greek classic era moved in a world of fantasy, untroubled by the outward course of things. The myths and stories from this period have remained unrivalled in the western world as sources of imagination and attractive ideas. Poets and artists from ancient time to the present have derived inspiration from Greek mythology and have discovered contemporary significance and relevance in classic mythological themes. The activity of the classic Greeks was in the highest degree artistic, their goal was to adapt reality aesthetically to subjective fantasies and expectations as opposed to understanding the real world as objectively as possible. Thus, there arose a picture of the universe which was completely removed from reality as we now know it.

Jung describes how children also think in a similar manner, they exist in the world of marvels which is expressed through their imaginative play. Jung saw connections between the mythological thinking of ancient man and the thinking found in children, early tribal communities, and dreams.

The Visionary and Psychological Mode of Creativity

The visionary and psychological modes of creativity directly correlate with fantasy and directed thinking, and in turn, Jung’s No.1 and No.2 personality.

Jung refers to the first mode as psychological because it “remains within the limits of the psychologically intelligible. Everything it embraces – the experiences as well as the artistic creation belongs to the realm of clearly understandable psychology” (Jung 1954, para. 140). Countless creations belong to this category. Whatever form they take their contents always originate from the sphere of conscious experience and are produced completely from an artist’s intention. The most obvious examples of this category in relation to the fine arts is the Pop Art of Andy Warhol, the realism of Gustav Courbet, and the impressionism of Claude Monet. Jung describes:

The psychological mode works with materials drawn from man’s conscious life – with crucial experience, powerful emotions, suffering, passion, the stuff of human fate in general… the raw material of this kind of creation is derived from the contents of man’s consciousness, from his eternally repeated joys and sorrows, but clarified and transfigured by the poet (Jung 1954, para. 139).

In contrast, the visionary mode correlates with fantasy thinking. According to Jung, works of this type force themselves upon the artist, bringing their own form. The artist becomes overwhelmed by a flood of thoughts and images that he never intended to create and “which his own will could never have brought into being”. Jung continues:

It is something strange that derives its existence from the hinterland of man’s mind, as if it had emerged from the abyss of prehuman ages… It is a primordial experience which surpasses man’s understanding and to which in his weakness he may easily succumb (ibid.141).

Examples of this category in relation to the fine arts is the visionary works of William Blake, the pseudo-abstract paintings of Hilma af Klint and the outsider art of Adolf Wolfli. With this creative mode, the artist is separate from the process of creation, he feels as though he is subordinate to his work or stands outside it as if he was a second person.