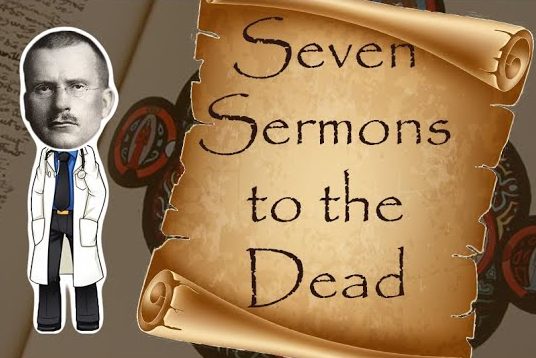 This article is a brief discussion on Jung’s Seven Sermons to the Dead, the mystical and philosophical extract from the Red Book that first introduced the concept of the individuation process.

Jung first discussed the principle of individuation in 1916 in a highly unusual text bearing the Latin name Septem Sermones and Mortuos, translated to Seven Sermons to the Dead. This document is a collection of mystical and philosophical texts and the only part of the Red Book which Jung chose to share during his lifetime but even so, it was published privately and anonymously.

This literary extract is a product of Jung’s early psychological journey, his personal exploration of the psyche which he described as his “confrontation with the unconscious”.  During 1913 and 1917 Jung willfully entered into imaginative and visionary states of consciousness. This Journey was carefully recorded in six black personal journals referred to as The Black Books, which he later transcribed into The Red Book: Liber Novus.  This manuscript style book was a personal masterpiece from which Jung formulated all his theories and to which he returned to study for the rest of his life. He states, “I had to draw concrete conclusions from the insights the unconscious had given me – and that task was to become a life work.”

The quotes I am about to share are quite odd, but it is important to remember that this text was a spontaneous literary experiment, produced by engaging with active imagination. It contained the seed to an idea which Jung attempted to understand for the rest of life.

I will only be discussing the first sermon as it introduces three terms: Pleroma, Creatura and Principum Individuationis. The sermon begins as follows

I begin with nothingness. Nothingness is the same as fullness. In infinity full is no better than empty. Nothingness is both empty and full. As well might ye say anything else of nothingness, as for instance, white is it, or black, or again, it is not, or it is. A thing that is infinite and eternal hath no qualities, since it hath all qualities… This nothingness or fullness we name the PLEROMA.

The term pleroma  is referring to an unconscious psychological state, which can be seen in early tribal communities and children. According to Jung we all start life as part of a the pleroma or, a collective, and develop our personality from the conventional outer world, our family, friends, school, and religion. Following this statement Jung introduces the term creatura:

The creatura, exists in contrast to the pleroma. It refers to the individual who is distinct from their surroundings and cultural influence. This involves an integration of the inner and outer world, becoming conscious of the pleroma and distinguishing yourself from it. The development of the creatura, generally begins to happen in adolescents when a person develops a persona. Jung continues:

In this quote Jung introduces individuation, describing it as something which is essential, a fundamental drive to distinguish oneself from their surroundings. To become your own individual, you must create distinctions and separate from cultural forces, to become who and what you naturally are. According to this sermon to distinguish yourself from the pleroma, you need to identify its qualities, which exists as pairs of opposites, such as good and evil, beautiful and ugly, light and dark. Jung poetically advises:

2 thoughts on “Seven Sermons to the Dead: Jung on Individuation”